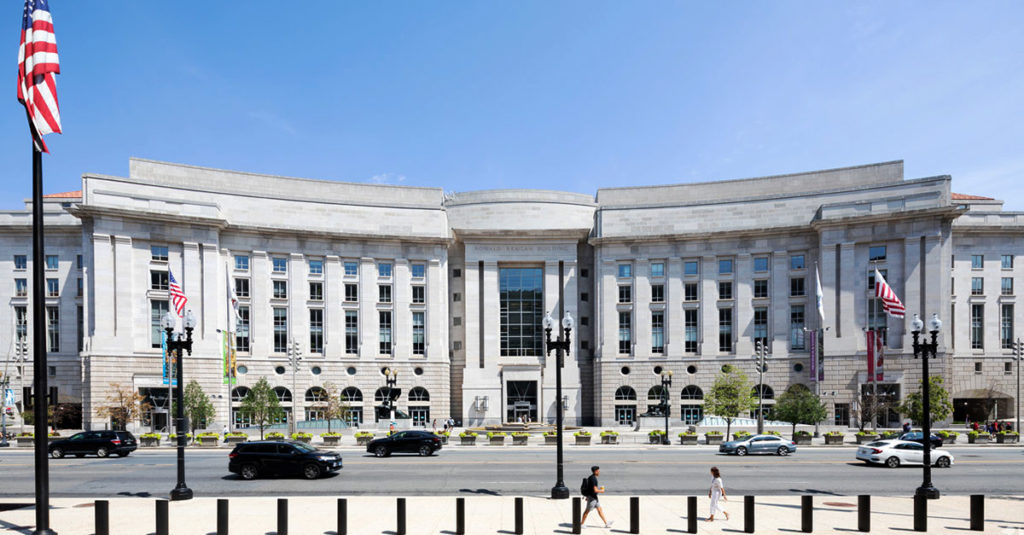 What is the Ronald Reagan Building?

The Reagan Building is considered the second largest government building in the country and the largest like it in the district. It’s the first of its kind designed for use in both government sectors and private industries.

Dedicated to trade, it was finally completed and opened for use in 1997. The Reagan Building boasts over 3.1 million square feet of office space spanning 11 acres and rests nestled comfortably between the White House and the U.S. Capitol.

Along with the office space, the Reagan Building houses a conference and event center, a variety of retail spaces, and your pick of dining establishments. It is also located in close proximity to the Federal Triangle Station, neatly situated between Pennsylvania Avenue, Constitution Avenue, and 15th Street.

For history buffs and connoisseurs of workspace locations rife with both character and local color, this particular area of DC was once home to a heavy concentration of brothels and saloons. Due to its central location in the nation’s capital, this area is often called “America’s Main Street.”

Perhaps what’s most unique about the Reagan Building is that the companies that operate within its walls are all dedicated to international trade and globalization. In addition to government organizations like the U.S. Customs and Border Protection, you’ll find private businesses like Quarterdeck Investment Partners, Inc and entities like the U.S. Agency for International Development and the Woodrow Wilson International Center for Scholars headquartered there.

Besides the business that’s conducted inside the Reagan Building, it’s also home to a variety of conferences. In fact, the Reagan Building is estimated to host over 1200 events every year, including trade shows, outdoor concerts, and cultural events. The facility boasts an information center, a metro rail station, and the city’s largest parking garage.

All of these features make it a premium hotspot for tourists. It’s estimated that the Reagan Building is visited by over one million tourists each and every year! It also happens to be a lunch favorite for the locals that live and work in the area.

Why the Reagan Building?

At this point, you might be wondering why any of these facts about the Reagan Building matters to you. After all, it’s just a building, right?

Well, yes and no. Given its location, its many historical attractions, and the foot traffic the Ronald Reagan Building sees every day, it’s not “just a building.” If you’re in the market for coworking space, it’s also an exceptional location for entrepreneurs and business owners alike and happens to be an especially attractive location for folks that are in the government contracting industry.

Coworking in the Ronald Reagan Building means plenty of opportunities to rub elbows with people you might not ordinarily get to spend much time with. This makes the Reagan Building and the coworking space we offer a valuable socializing and networking opportunity you simply won’t find anywhere else. Contact District Offices today and book a tour of our Pennsylvania Avenue location.